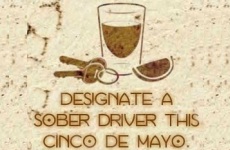 Every 51 minutes in 2012, someone was killed in a drunk driving crash in the United States, and 89 of those fatalities were around Cinco de Mayo. In fact, from 2011 to 2012, the number of people killed in drunk driving crashes on Cinco de Mayo more than doubled. In all fatal crashes in 2012, seventy-one percent of the drunk drivers involved had blood alcohol concentrations (BAC) of .15 or higher—almost twice the legal limit.

Preventing drunk driving is as easy as uno, dos, tres:
1) Plan your ride ahead of time:

2) If you see a drunk driver on the road, contact local police. You could save a life.
3) If you know people who are about to drive or ride while impaired, take their keys and help them make other arrangements to get to where they are going safely.

Remember, drunk driving is never the answer, and there’s always another option. If you are going to drink at all on Cinco de Mayo, designate a sober driver, because Buzzed Driving Is Drunk Driving.

Call 717-616-8995 or email info@premiere1limousine.com for pricing and availability.