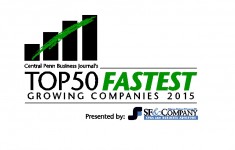 “Receiving notification that we were selected for this list for the second year in a row is extremely gratifying,” said Douglas Rydbom, Sr. Member of Premiere #1 Limousine Service. “Everyone works hard and takes pride in contributing to our growth. It’s great to talk internally about our success, but submitting our revenue reports and letting the numbers talk for themselves is very rewarding.”

In order to be eligible for consideration, companies were required to show revenue of at least $500,000 in each of the fiscal years ending 2012, 2013 and 2014, as well as revenue growth in 2014, as compared to 2012. For-profit entities that are headquartered in Adams, Cumberland, Dauphin, Lancaster, Lebanon, Perry or York County were eligible for nomination.

The presenting sponsor of the program, SF&Company, calculated the nominations and then ranked the companies according to revenue growth over the three-year period. Both dollar and percentage increases were taken into consideration. This ranking formula led to the list of winners.

Premiere #1 Limousine Service and the other 49 winners will be honored at an awards breakfast on Friday, October 23, 2015, when their ranks will be revealed. A complete, ranked list of honorees and profiles of each company and their financial growth will be published in a special supplement to the October 30 issue of the Central Penn Business Journal.

Premiere #1 Limousine Service has provided luxury transportation services in Central PA for 14 years. In March 2009, a new owner acquired the business and has since expanded the fleet to include S and E class Mercedes, SUVs, passenger vans, corporate limousines, minibuses and luxury motor coaches. With a combined total of 35+ years in the transportation industry, the principals have a highly capable and experienced management team in place. Our discerning, upscale clients demand safety, quality, and exceptional value, which we consistently deliver. For more info go to Premiere1Limousine.com, or call 717-616-8995.